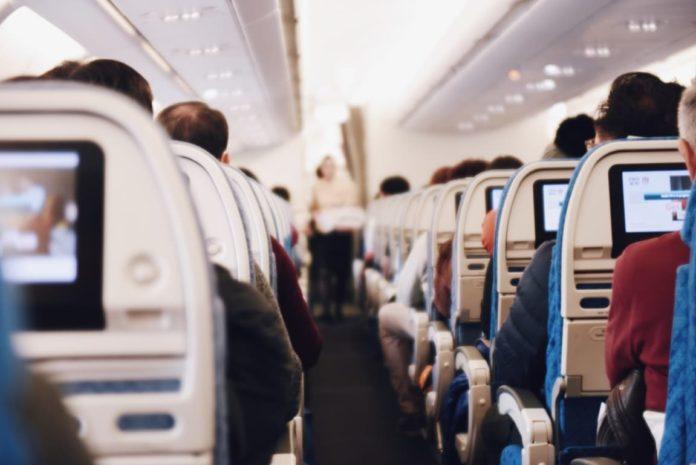 Be it a heavy meal right before you boarded the plane or just plain old flight sickness, you might want to throw your guts out for a plethora of reasons. The last place you want to get sick at the worst possible time is on route to your destination in a plane.

There is no escaping the fact that a plane ride can cause motion sickness for all passengers, especially when the journey is long. So, now that you can’t escape it, how do you deal with it? In this post, we will elaborate on how you can puke on a flight without getting the ‘clumsy’ tag attached to you.

How to puke on a flight? 7 tips to make the process easier (and less embarrassing)

Below we have mentioned 7 tips or steps that can make it easier for you to puke on a flight while also making it less embarrassing for you to throw up.

1.   Use the Sickness Bag kept in your seat pocket (especially during the worst times)

Vomiting  while still being seated is the only option when you are unable to move (like during takeoffs and landings). For any adult, this is a difficult and embarrassing proposition, but don’t worry about that!

All of us do it at some point or another! The bag in front of you, which is designed to hold liquids and has seals, is all you need – the sickness bag. The people around you are just as human as you are, and they may sympathize with your situation.

Most of the time, they’ll try to assist you by contacting the cabin crew, expanding your personal space, or providing tissues. Just focus on the vomiting and not on anyone else. Next, it’s time to shut the bag now! Wait until you’re able to move to dump it in the toilet waste bin before placing it under the seat. Never be afraid to drop hints to those around you that you are feeling rather queasy , as this will spare you from more embarrassment.

2.   Use the toilet at other times

Vomiting in the toilet is considerably easier and more comfortable than vomiting at home – it is virtually identical to vomiting at home! Keep in mind one thing: when speaking with the cabin crew, get straight to the point by saying, “I want to vomit.” That will compel them to supply all of the assistance! Please do not vomit in the sink, as the toilet will become unusable as a result.

3.   Keep a backup pair of clothes as carry-on

It is ideal to have a backup pair of clothes in your carry-on or handbag that you will be carrying with you in the airplane cabin. The reason behind this is that if you get air sick, puking in either a toilet or a sealable vomit bag, might result in some smears of the vomit to cling to your cloth.

Who wants to roam around with tiny chunks of dried food stuck to their clothes?

This is why it is ideal to keep a backup pair of clothes that you can change into, when you get down at the destination airport or in the flight itself.

4.   Keep some tissues and a towel handy

If you are well aware of your motion sickness (even if you are not), it is ideal to keep some tissues and a towel as carry-on or in your handbag, so that cleaning up after puking is a considerably easier job.

There are seats closer to the front of the plane and immediately on the plane wings that are a little more stable, reducing the movement of your body during the trips. The further back you get on a bus, the more bumpy it gets.

If you have an upset stomach when boarding, ask another passenger to switch seats with you or ask a member of the cabin crew for assistance in finding a seat closer to the restroom. As a result, you’ll feel more at ease and be able to get to the bathroom more quickly if the urge to vomit strikes.

Otherwise, look for a seat towards the back of the room or next to an empty row if you can. If you have to perform it while seated, this will provide you more room.

6.   Keep a toothbrush and mint handy

Nobody likes the aftertaste that puking leaves in the mouth. You would not want to have a bad breath when going to an important conference meeting that you flew to from so far away. This is why, it is recommended to keep a toothbrush (and of course, a toothpaste) with you as carry on or in the hand baggage. When you carry a toothpaste, you would be required to abide by the 3-1-1 liquids rule, which means you could carry a travel pack of toothpaste that is no more than 100ml in quantity.

If you can not brush your teeth after throwing up in a flight, you can alternatively use a couple of mint to freshen up your mouth. This could also save you from carrying an additional toothpaste, just for the sake of air sickness, that you could be facing while on the flight.

7.   Reach out to the cabin crew when you feel queasy

If it is an otherwise good time to let you loosen up your seatbelt and proceed to the toilet, someone from the cabin crew will help you get to the washroom so you can puke in private.

However, if it is not allowed to get up from your seat (right after take-off or some time before landing), the cabin crew will assist you on how you can use the sealable vomit bag kept in your seat pocket.

What is Air Sickness?

Airsickness is a type of disorder that causes cold sweats, nausea, and vomiting during a plane flight. A lot of people get sick when the plane shakes, and this can make them feel very sick. People who get sick during a flight can lessen the effects of airsickness by paying attention to a few things.

How Does Air Sickness Occur?

Air sickness can be caused by a lot of different things, but in general, the disorder is caused by a communication problem between the ear and the eye. There are hairs in our inner ear that can tell when we move. These hairs can tell when the plane is moving forward, but the eye, which sees a fixed view of the plane, can’t tell. The ear tells the brain that “We’re moving,” while the eye tells the brain that “No, we’re not.” This causes a mix-up in the brain, which causes dizziness, nausea, sweating, yawning, trembling, fatigue, vomiting, and more.

Airsickness is a big problem for people who want to travel by air a lot. It lowers their living standards, which is bad for them. It’s possible to use certain techniques to help lessen or even get rid of the effects of airsickness.

How to prevent puking on a flight?

The bathrooms are small, the seats are cramped, and there is no fresh air on a plane—no one wants to become sick. These techniques can assist if you suffer from motion sickness or are concerned about it when flying.

Doctors say that when you’re suffering from motion sickness, you should focus on a stable scene or horizon line. However, reading isn’t going to help. By doing this, you’re increasing the amount of movement in your body, which could lead to even greater instability internally.

Motion sickness can be brought on or exacerbated by reading, whether it’s from a book, magazine, or digital device. Even if you’re not much of a reader, you might like listening to a book on tape instead.  Avoiding tense thrillers and mysteries; books about flying may help you relax.

There are seats closer to the front of the plane and immediately on the plane wings that are a little more stable, reducing the movement of your body during the trips. The further back you get on a bus, the more bumpy it gets; the same concept works for flights too.

3.   Watch What You Eat Before Your Flight

Eating a light meal the night before and the day before flying is recommended by the Aircraft Owners and Pilots Association (AOPA). Limit your caloric intake and stay away from salty foods. When flying, salty meals exacerbate dehydration, which also occurs when the air is dry (pro tip: drink lots of water). Also, stay away from heavy, oily dishes that can cause you discomfort.

4.   Use the Air Vents to Your Advantage

When you’re having motion sickness symptoms in a tight location, such as an aircraft seat, direct airflow can make all the difference. If you’re feeling queasy or sick, turn to the air vent above your seat for some relief.

A study published in the Aviation, Space, and Environmental Medicine journal in 1995 found that self-acupressure to reduce motion sickness was effective back then. How does acupressure work exactly? The technique of using various pressure spots on your body to stimulate the flow of energy throughout your entire body does the magic.

To alleviate motion nausea, place your thumb about two inches below the wrist crease. Find out what works best for you by holding it down for a few minutes at different pressures and see what happens.

Make sure a close friend or family member reassures you that you won’t get motion sickness, and then work on reducing your anxiety about it. Make a mantra, such as “I can control my motion sickness,” to chant when you’re having a hard time during the flight.

When it comes to digestion, ginger is a godsend. Ask for a can of ginger ale when the beverage cart arrives in the cabin. , soTaking huge gulps of the beverage will just exacerbate your stomach pain, so take smaller sips. An upset stomach can be soothed with hard ginger candies too.

Anxiety and stress amplify and prolong the effects of motion sickness. Learning meditation or deep-breathing exercises before and during a flight can help alleviate your worry.

Learning meditation or deep-breathing exercises before and during a flight can help alleviate your worry. Don’t be afraid to ask someone who’s flown before about the regular sounds and movements of an aircraft, so you can prepare yourself for the experience. If you’re travelling for pleasure, adopt an optimistic frame of mind and look forward to your destination.