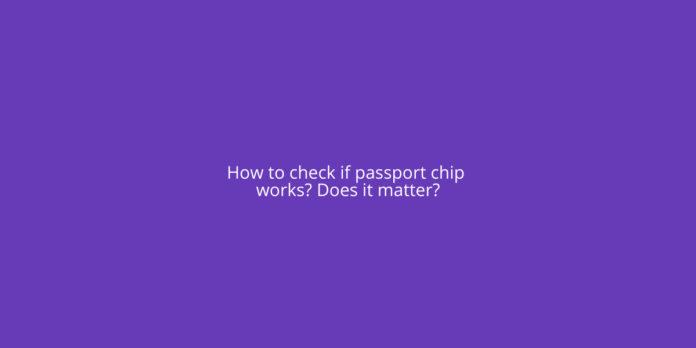 The majority of modern passport readers are capable of recognizing an ePassport and confirming that the chip is functioning properly. It is likely that if you travel on a frequent basis, you will have difficulties as additional nations implement this security measure over time (delays and inconvenience while the passport authenticity is confirmed).

How to check if a passport chip works?

The biometric information in ePassports is carried by a “Near Field Communication” (NFC) chip.

When it comes to modern smartphones, many of them come equipped with an NFC reader, which allows them to read the information contained in an ePassport. If you are able to access that information, then your ePassport is functional. You will most likely be unable to do so since the device is malfunctioning.

Several NFC-enabled apps, such as NFC TagInfo for Android, are available to read the information from a passport. Your passport number, date of birth, and passport expiration date serve as a password for the information stored on the NFC chip, and you will be required to manually enter these before the data from the NFC chip can be displayed.

Does it matter if a passport chip works?

If the chip fails or does not work, the passport continues to be a valid travel document until the expiration date on the page opposite the chip fails. As if you were carrying a passport without a chip, you will continue to be processed by the port-of-entry official.

You will not have any problems passing past immigration with an “invalid” ePassport because no nations are now requiring the usage of electronic passports for entrance.

Contrary to popular belief, immigration officers usually use their common sense when determining what types of passport damage are acceptable and what types are not. It is possible that your passport will be denied entrance if the passport chip, photo page, or any of your applicable visas appear to have been tampered with in any manner.

However, if your passport is in a very poor condition that they cannot be certain it is genuine, you can expect a lot more scrutiny and possibly even denial of admission. However, if the damage is restricted to a few blank pages at the back, they won’t be bothered with it.

However, a valid ePassport (one with a working passport chip) is necessary to use the automated accelerated entry lanes in some countries, such as Australia (SmartGate) and the United States (Global Entry). Using these lanes will not be possible if your ePassport is not in working order; however, if you use the SmartGate and it fails, you will be able to go up to the front of the regular queues.

How to Scan A Passport Chip?

As per intercom, here is how you can scan your passport chip:

What is NFC and how does NFC work?

“Near Field Communications” refers to the ability of two devices to communicate with one other. When the devices are close to each other, this is performed as the name says.

Contactless payments are enabled by NFC technology, so you’ve probably heard of it.

Non-contact communication (NFC) is not a revolutionary new technology. RFID (radio frequency identification) technology has been available for decades and is merely being refined. Using a key card in an office building or hotel room isn’t difficult if you’ve done it before.

Inductive coupling is the underlying basis of both radio frequency identification (RFID) and near field communication (NFC). When an electric current is passed through a coil, the reading device generates a magnetic field. Without any cables or physical touch, a tag (with its own coil) can be activated by a magnetic field. Data on the tag can then be wirelessly sent when the initial handshake has been completed.

The primary difference between NFC and RFID is the latter’s greater communication range. RFID, for example, is used in some locations to automatically collect road tolls. To pay, simply drive through the toll booth with your windshield tag attached. If the RFID tag has a power supply, it can communicate across even greater distances (like 100 feet or more).

Only a few centimeters, at most, is the greatest range of NFC. You’ll also notice that in most smartphone-related applications, the software will only begin communicating if there is physical touch. As the technology is being utilized to convey sensitive data, this is extremely crucial.

NFC devices can also function as both a reader and a tag. One piece of hardware—say, your smartphone—can be used to run many programs at the same time thanks to its bidirectional capability.

Can You Still Use a Damaged Passport?

No problems should arise from normal wear and tear of the passport You may be unable to travel if the harm is more severe. It is critical to remember the following: