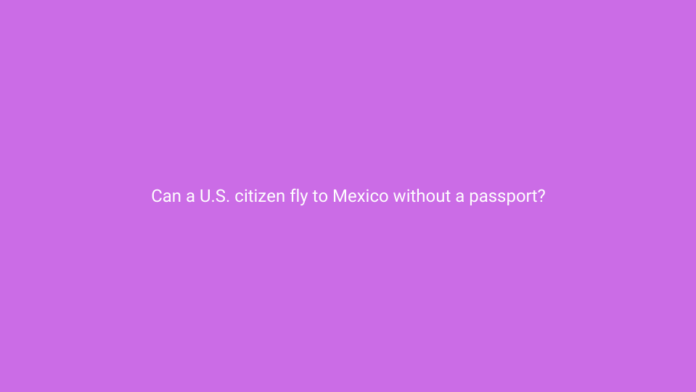 Can you fly to Mexico without a passport?

A passport book is necessary for every plane admission from the U.S. to Mexico. However, cruise ships frequently land in various coastal regions, like Cozumel, and U.S. citizens can lawfully visit Mexico as part of a scheduled closed-loop cruise without a passport.

Yes, you must display a valid passport when flying into and out of Mexico as a U.S. citizen.

This rule does not have any exceptions. When flying by air, passport cards are not accepted, and all in all, passports are a must when it comes to flying to Mexico from the U.S.

A passport card is also required to travel to Mexico by land through Arizona, New Mexico, Texas, and California.

When flying into Mexico, you’ll also require a “Forma Migratoria Multiple,” or FMT. An FMT can be obtained from any airline or port.

If you’re flying into Mexico, you’ll need your U.S. passport book to enter and exit the country. You should have your passport with you while flying back into the United States. When flying, even babies and toddlers must have their own passports.

All visitors entering or reentering the United States by air are required to display a valid passport book under the U.S. Western Hemisphere Travel Initiative (WHTI), which was enacted in 2007 to bolster border security. Travelers will need a Forma Migratoria Multiple (FMM) tourist permit card in addition to an official passport. For longer visits and air travel, tourist cards are required. Tourist cards are available for purchase at Mexican consulates, tourism offices, airports, and airline offices.

The FMT has a minor charge attached to it. This “tourist” tax is usually included in the price of a flying ticket to Mexico.

Air travelers will receive a stamp indicating that they are traveling legally and that their FMT is valid.

Another thing worth mentioning is that because you can only stay for six months as a tourist, it’s a good idea to have at least six months of validity on your passport, even if you’re only traveling for the weekend.

Travelers must always carry their cards with them. Immigration federal officials have the authority to request proof of legal status from visitors at any time. When the customs officer delivers your FMM form to you at the airport, it’s critical that you keep track of your section. You’ll need that information to re-enter the United States.

Do you need a passport when traveling to Mexico by land?

Those under the age of 16 are permitted to re-enter the United States by land with a valid passport or other official documents (naturalization certificate or birth certificate). Vehicles can also cross the Mexican border with a SENTRI Card.

Passport verification and a visitor’s authorization are required before you can enter the country.

Does my passport have to be valid for six months to travel to Mexico?

The current rule is that you may use your U.S. passport for travel to and from the United States within the validity date displayed on the passport. That said, check with your airline as many still implement a 3 or 6-month rule, meaning the passport has to have either 3 months or 6 months of validity remaining at the time you enter Mexico.

Can you fly from the U.S. to Mexico without a visa?

Visitors from Australia, Canada, New Zealand, the United Kingdom, and the United States, among other nations, do not need a visa to enter Mexico.

Visitors are permitted to stay in the country for 180 days. A Mexico Visitor’s Permit (FMM) must be filled out at the entry point before you may enter the country. You’ll need to display it when you leave the nation to confirm that you’ve been in the country for the 180-day maximum.

At a local immigration office (accessible in every city and many towns) or the airport, you can ask for a replacement if you lose it. It’s an excellent idea to take a picture of the document. It costs roughly $30 USD to replace the FMM.

Upon arrival, your FMM is stamped. In the event that you’re taking a bus or a car across the border, you’ll need to get a border-crossing card and get it stamped by immigration agents.

Check with the National Institute of Immigration at your destination in Mexico if you did not receive a tourist card at the border. Present your bus ticket and ask for a tourist card.

It is possible to be fined, jailed, or ejected from the nation if a tourist card is not properly stamped.

Check the vehicle’s importing restrictions if you plan on driving into Mexico.

Can you travel from Mexico to the U.S. without a passport?

Each American citizen is required to have a passport of his or her own. For travel by land or sea, infants of U.S. and Canadian citizens are not required to have a passport, but they must present a copy of their birth certificate. The Department of State suggests that the parent(s) accompany their children with a consent letter due to an increase in cases of child abduction in custody cases and an increasing number of children trafficked.

Either a birth certificate, a Naturalization Certificate, or a Consular Report of Birth Abroad is required by all U.S. citizen children under the age of 16 when arriving from Canada or Mexico.

Except for LPRs, refugees, and asylees, all children and infants flying into the United States must have a passport. They can apply for entry to the United States using their Department of Homeland Security (DHS) Migrant Registration Card (Form I-551) or other valid proof of permanent residence status or refugee or asylee status.

What about traveling to Canada?

Americans who wish to travel north of the border must present identification and evidence of citizenship. A passport checks both of these boxes, and it’s probably your best choice for a hassle-free travel experience overall.

In the same way that tourists entering Mexico must provide a valid passport book in order to obtain admission, travelers entering Canada must do the same. When traveling from Canada to the United States, nationals of the United States must display their passport in order to re-enter the country. Check to see that your passport is valid at least until the day of your departure.

If you are entering Canada by land, you can use a passport book, but this is not the only option available to citizens of the United States. Alternatively, visitors may provide a passport card, an improved driver’s license, or a card from one of the Customs and Border Protection’s Trusted Traveler Programs (NEXUS, SENTRI, or FAST) as proof of citizenship and identification to customs officials. Children under the age of 15 must provide identification to prove their citizenship.

No, you can not get back from Mexico to the U.S. without a passport. Unless you are on a closed-loop cruise, you cannot leave Mexico without a passport book or card. Passport books are required by both airlines for check-in, immigration, and, most likely, at the airport. Both the Mexican and American sides of the border demand a passport card or a journal to travel.

For those who are prone to losing things when traveling, this is a common concern, and it begs the question of the value of U.S. citizenship.

A US citizen who loses his or her passport in another country should be entitled to return to the United States because it is his or her home.

If you’re a U.S. citizen, you don’t need a passport to cross a border into the United States. To go to the U.S. immigration checkpoint, one must first exit a foreign country. This rarely happens, though.

To enter the United States, you must have a passport, but you cannot cross the Mexican border or board a plane without one.

American citizens who misplace their passports in airports or complain about them while flying and are subsequently deported stand to gain the most from this deal.

You may want to inform the nearest U.S. embassy or consulate if you discover that your passport has been lost or stolen while abroad. However, since Mexico is a neighboring country, there are numerous consulates around the world, not just at the Mexican embassy. Thus, finding a consulate or embassy representing the U.S. in Mexico should not be a problem.

In the event that your passport has been lost or stolen, a visit to an embassy or consulate would be a good idea to verify that a replacement has been issued. It can take up to a few weeks to process standard passport book replacements because they’re designated for U.S. citizens who live outside of the country.

The only exception is for tourists who just need a passport with a short validity period in order to return home or conclude their journey.

However, they are normally only utilized in an emergency situation to return to the United States. Call one of the many U.S. Consular Offices in Mexico if you’ve lost your passport or if any of your other identifying documents have been tampered with since you may need medical attention before entering the U.S.

The U.S. State Department strongly recommends that American citizens check with their travel insurance provider to see if their policy covers medical expenses in Mexico.

Internationally, there is no such thing. The airline employees, the security checkpoint agents, and maybe the gate agents will all inspect your passport book. Passport books that are not expired are not allowed on international flights.

There is nothing stopping you from using your expired passport as a form of photographic identification when traveling within the United States of America.

It is up to the discretion of airport staff whether or not you are permitted entry into the screening area; thus, having a current state-issued I.D. is highly recommended. As long as it hasn’t been stamped or used for foreign travel, an expired passport is acceptable in a number of situations.

How To Book A Round Trip Flight And A One Way...

Can You Bring an Empty Water Bottle on a Plane: The...

Can You Bring Hair Clippers On A Plane