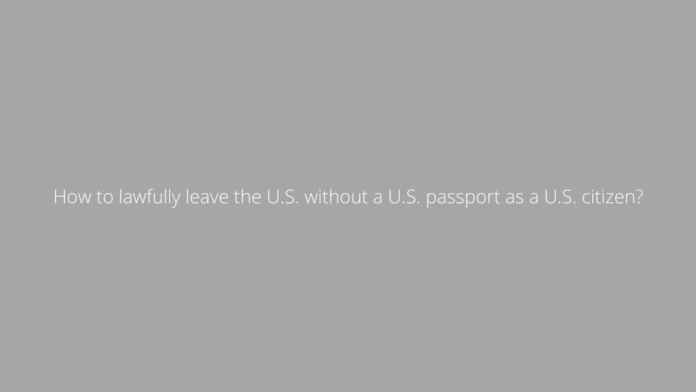 If your passport is delayed or you need to travel urgently, you can request a Presidential exception from the White House. If granted, you can leave the U.S without a U.S. passport and without violating any law.

It’s also possible to leave the country without a US-issued passport by utilising one of the exceptions listed in 22 CFR 53.2 (which is suggestive). This again is a completely lawful solution and you do not need to worry about having violated any of the travel laws as a U.S. citizen.

However, now comes another question: Can you leave the U.S. without a U.S. passport without applying the above two methods?

If you’re curious about this, here’s a quick answer: YES! Without a U.S. passport, you are free to exit the country.

United States law states that all citizens of the United States, regardless of whether they’re entering or departing the country, are required to “carry” a U.S. passport.

If a person has dual citizenship, they must utilise a U.S. passport to enter or exit the United States, according to the law.

U.S. citizens should be required to present a valid U.S. passport or NEXUS card when exiting or entering the United States via an aircraft from the Western Hemisphere.

What if you leave the country without a passport? However, despite the fact that you’re likely breaking the law, the law isn’t enforced to the same extent when it comes to departures from the United States as it is when you arrive.

However, if you are leaving the United States, it is unlikely that either the TSA or the airline cares whether you have a US passport or not.

However, there is always a price to pay…

While you’re on vacation, it’s a good idea to apply for a U.S. passport at the U.S. embassy where you’re currently staying.

Can you leave the U.S. with no passport at all?

You can theoretically leave the United States without a passport, but don’t get your hopes up just yet. Taking a step back, reevaluate your decision. You will not be allowed to board an international aircraft without a passport from the airline you are flying with.

You may be barred from boarding your aircraft despite the fact that the US government and TSA appear to have no ‘active’ problem with you violating a non-enforceable statute that states that you must leave the US with a passport.

Due to a lack of documents, you may be delayed or even denied admission to the nation you are travelling to if you have no passport at all.

Can a U.S. citizen return to the U.S. on an expired U.S. passport?

Until December 31, 2021, U.S. citizens will be able to return to the United States using expired U.S. passports. Only nationals of the United States whose passports expired on or after January 1, 2020 are affected by this policy.

On Monday, the State Department announced that American citizens who had their passports expire during the Covid-19 outbreak will be able to return to the United States before they have to renew their travel permits.

US citizens presently outside the country and whose passports expire on or before Jan. 1, 2020, will be affected by the decision.

Renewing passports in many countries requires that American citizens visit a US Embassy or Consulate in order to submit their application for renewal of their travel documents. Only emergency services are available at several of these offices, which have been severely restricted or even shuttered due to Covid-19 regulations. Many Americans have been unable to return to the United States because of delays and difficulties in renewing their visas.

Immigrants from the United States have sought the advice of immigration lawyers. To secure an appointment at a hard-to-get embassy, some people have paid hefty amounts to bootleggers and passport courier service providers.

In addition to adults, the State Department has added a new exemption for expired passports that applies to minors, whose passports expire after five years. If you’re planning to leave the nation, you’ll still need to bring along your passport and visa.

The exception does not apply to babies born outside the United States who have not yet received a passport or a formal record of a child’s claim to American citizenship, known as a Consular Report of Birth Abroad.

Citizens must have an expired passport and be going directly to the United States, or on a connecting aircraft with a short layover, in order to take advantage of the exception. Passports that have expired cannot be used to travel between countries.

Citizens of the United States who return to their homeland must still provide documentation of a negative Covid-19 test result obtained within 72 hours of their departure from the nation.

What are the documents required by U.S. citizens to enter the U.S. or travel internationally?

In order to travel outside of the United States, US citizens must meet the country’s document requirements. Authentic Certificate Requirements for Travel Documents is provided by the Department of State (DOS). In addition, a number of U.S. embassies and consulates offer assistance to applicants in obtaining the necessary papers. Please visit U.S. Embassy.gov for a complete list of U.S. embassies.

A valid U.S. passport is necessary for all U.S. citizens flying internationally to board a domestic flight to the United States.

There are a few things to keep in mind if you’re planning a trip to the Western Hemisphere:

Passports or NEXUS cards are necessary for all U.S. citizens flying out of or into the United States from the Western Hemisphere (if utilising a NEXUS kiosk when departing from a designated Canadian airport). A Merchant Mariner’s Record (for U.S. citizens on official maritime business.) Traveling on official business requires a military ID card: When flying by plane, children must also provide their own passports, as well.

A valid WHTI-compliant document must be shown by U.S. citizens entering the United States by land or sea, such as:

It is not permitted to use the Global Entry (GE) card to enter Canada, Mexico, or any adjacent island.

Photo identification and instructions are required for military members travelling on official business. Passports are required for all members of the family (with the exception of children 15 and younger arriving by land or sea.)

All children under the age of 15 who arrive in the United States by land or sea from a contiguous territory (Canada or Mexico) are required to provide an original or copy of their birth certificate, a Consular Report of Birth Abroad, or a Naturalization Certificate to prove their citizenship. Hospital-issued birth certificates are acceptable if the real birth certificate has not arrived from the Vital Records Department.

Birth Certificates, Consular Reports of Birth Abroad, or Naturalization Certificates may also be presented by a U.S. citizen kid between the ages of 16 and 18 who is travelling with an adult-supervised school group, religious group, social or cultural organisation, or sports team.

Please contact the National Passport if you have any questions about passport documentation.

What are the documents required to lawfully travel within the U.S.?

If you’re a lawful permanent resident or hold a nonimmigrant visa, you’re well aware that your travel outside the United States may have an impact on your ability to return to the nation. Even if you are not leaving the United States, it is a good idea to be aware of the paperwork you will need to travel within the country. Even naturalised citizens and non-citizens must carry identification while travelling by air, and naturalised citizens and non-citizens should make sure they have the proper papers.

If you have a green card and are a lawful permanent resident, you must carry it with you at all times, especially when travelling. When going by automobile, even if you don’t need to provide identification at the airport, keep your green card handy. The fact that you can easily demonstrate your lawful immigration status if you are pulled over by the police while driving or in any other situation is a comforting thought.

In order to travel within the United States without a passport, you must have a green card. The bottom line is that no matter how short your domestic trip is, it’s a good idea to bring along as much documentation as possible, including your passport, just in case.

Even if you don’t have a photo ID, you may be allowed to board your flight. Depending on the airport, you may be asked to supply sufficient personal information so that employees can compare your data to that stored in public or government databases. On the other hand, you shouldn’t put your faith in this. You’re out of luck and won’t be able to board your flight if your identity cannot be verified in this manner. Passports are a must-have for travellers.

Domestic Travel in the U.S. for Nonimmigrants

Nonimmigrant visa holders, on the other hand, have an even greater need to keep their documents with them while they travel around the United States. Traveling by car, bus, rail, or aircraft while a nonimmigrant? Be sure to have your immigration paperwork on hand. The passport from your home country is also required at all times.

In the event that you hold an overseas driver’s licence, you should keep it on you at all times—even if you are not driving.

As a naturalised American citizen, you enjoy the same travel rights as a citizen born in the United States. However, even citizens, regardless of where they were born, are required to travel with a photo ID. Even if you don’t plan to go outside the United States in the near future, you should get a U.S. passport if you don’t already have one.

For domestic air travel, a passport is one of the most commonly used forms of identification. Although the application process for a passport can take several weeks, an adult U.S. passport is valid for 10 years, so you shouldn’t wait to get one until you need it.

For those who don’t have a driver’s licence, a state-issued ID card, or a military ID are acceptable forms of identification. An acceptable photo ID is required for air travel, and may also be required for car rentals and hotel reservations.

Keep your passport and other forms of identification with you at all times when travelling by plane, train, or automobile. Make copies of all of your important documents and, if feasible, entrust them to a trusted friend or family member who can keep them secure and deliver them to you if necessary before you leave home.

How to Add Plane Tickets to Apple Wallet

Why Can’t You Pump Your Own Gas in Oregon?

How to Find the Nearest Gas Station on Google Maps?