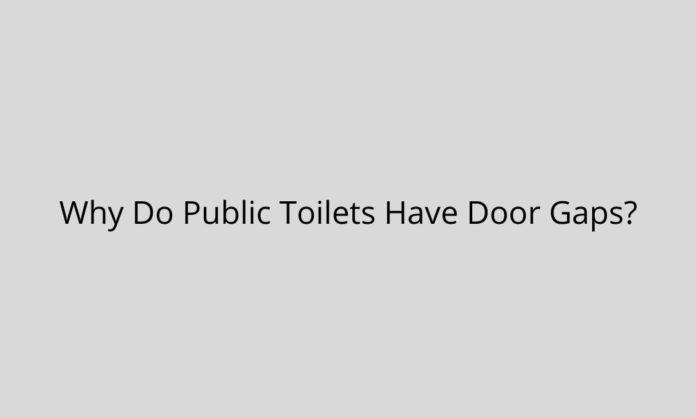 If you spend a lot of your time outside, you are likely to have used a public toilet at least once. But, not a lot of us really want to use public toilets, and if you’re a traveler visiting the U.S., we’re sure you’d loathe the odd ‘nature calls’ when you’re out in public. The reason behind this is the little privacy that public toilets in the U.S. offer with those humongous door gaps.

These door gaps are present between the door and the floor and on the sides between the door hinges and the wall that the door is attached to. So, now the question is, if we are supposed to feel safe when taking care of our business, why are we met with the certain creepy vibes that these door gaps bring along with them? Is a public pooper not supposed to have his privacy just because it’s a ‘public’ toilet?

Door gaps make it easier to clean the toilet

A janitor’s job is tough already – from constantly making sure that every cubicle is squeaky clean to mopping the floor most of the time. Now, if they had to clean every cubicle separately had there been no door gaps, the work would triple up.

Also, with large gaps at the bottom of the bathroom door, janitors can easily hose down, or power wash the surface at a single time, all while having more room to work with. If there were floor-to-ceiling doors, the janitor might still have to clean every cubicle.

However, the open layout makes it far easier for them to do their job. It is highly possible that if the job was any harder, janitors could possibly overlook potentially harmful germs and viruses that can give you a few terrifying days with cold or even chlamydia.

Therefore, working with a little less privacy when emptying your bladder in a clean bathroom cubicle is considerably better than gagging in an unclean toilet with germs floating all around you.

Janitors can immediately recognize if there’s a leaky cubicle

Any public toilet regularly faces overflowing in random cubicles due to clogging and other reasons. Now, if there is a large toilet (toilets with more cubicles in comparison to the average-sized toilets) such as that in an airport terminal with a leaky cubicle, it would be tough for the janitor to open each door to recognize which cubicle has gone faulty. This would not only make the toilet messier but take up the janitor’s time more than it really should.

With large door gaps at the bottom, a janitor can immediately recognize which cubicle is overflowing before running to it with his gears and starting to get it cleaned already.

Both Bottom and Side Gaps prevent the accumulation of fumes

Both bottom, side, and upper gaps (between the door and the ceiling) in public restrooms improve air circulation and avoid the accumulation of fumes. Completely closed public cubicles tend to get more stinky in comparison to open ones, mainly because of poor air circulation.

It’s indeed true that restrooms with an open layout get stinky from time to time, but getting rid of the stink is easier than in the enclosed bathrooms since the stench disappears multiple times faster.

If you hate a public toilet smelling like Porta Potty when you visit for the loo, thank those door gaps (and the janitors, of course).

If you feel awkward about people looking at your shoes while you attend to your private business, you really should not. What’s bugging you is also what’s avoiding another person from barging into your space. But there is a reason there are locks on the door, right? Let us ask you this: what if the lock is jammed or does not work, or you forgot to (if you’re in a real hurry) lock the door in the first place?

This is why when a person sees someone’s feet inside the stall, they move to another one, or if all of them are occupied, they just stand outside to let the other person know they are in line. This brings us to our next pointer…

America has a cultural habit of prioritizing speed over comfort; thus, when you’re in a public toilet, you’re supposed to go and get going instead of lounging in there. With closed cubicles, such as those in high-end hotels and restaurants, visitors often get too comfortable as the feeling of isolation sets in. This makes them lose the sense of time and the fact that there may be people waiting outside.

With large door gaps at the bottom and at least an inch huge gap on both sides, you’re constantly feeling like someone’s barging into your private space (especially when you have someone standing right before your cubicle), or there’s an eye peeping from the side of the door. This makes you get done with your business faster, therefore reducing bathroom traffic.

An escape route to wiggle out

Both bottom and upper door gaps act as escape routes for you to either jump off the cubicle or wiggle out of it, depending on which door gap you’re using to get yourself out. Emergency situations don’t see if it’s a public toilet or a restaurant; they just happen. And, in cases such as these, if you have a jammed door or a faulty lock that just won’t budge, door gaps make for quick getaway options.

To let someone help the occupant if they are in distress

The door gaps at the bottom are large enough for someone to peek at the ground (not discussing your fear of some grizzly head popping from right under the door). If an occupant has lost consciousness, it can easily be noticed by either another toilet user or the janitor, quickening the whole process of calling for emergency and providing medical attention to the unconscious individual.

When the door is locked and breaking-opening the door seems like a less viable option; the rescuer can slip inside from beneath the door or pull out the occupant from right under. It might sound disgusting, but when it comes to a life or death situation, nothing is gross enough.

People with disabilities need more room for maneuverability of the wheelchair; the maneuverability is made possible with large door gaps at the bottom that allow handicapped patrons to move within the stall and have enough space to get light.

However, not every public toilet would have been thinking about making the cubicles accessible to handicapped individuals, which is why ADA requires every public toilet or restroom to have at least 9″ minimum space at the bottom of the door. Although most expensive restaurants and hotels do not have open layout cubicles, they do have a separate toilet or a certain amount of cubicles designed for handicapped patrons.

It has been psychologically proven that any person is less likely to resort to doing harmful or inappropriate activities when they feel less protected or that their privacy is being compromised. With an inch of the gap on either side of the door and a gaping gap at the bottom and on top (between ceiling and door), some bad apples with ill-intention will avoid doing nefarious activities in public toilets such as:

These small infringements on the treasured privacy of people with ill-intent together allow prevention of these activities.

Toilet paper can be shared or supplied.

In an enclosed square, there’s no way you can get toilet paper handed to you unless you’re comfortable with the janitor seeing you with your pants down, sitting on the toilet seat.

Logistically Cheaper for Owners to Install

One of the most obvious reasons behind door gaps is that doors that come only part of the way down are universally installable because they do not need to be customized according to the length of the room (as for the floor-to-ceiling doors). This saves up on the logistical costs, as the doors do not need to be custom-measured and built. They are not only cheaper, but they also require fewer load-bearings to support them, which makes up for another saving.

Since half-door cubicles are cheaper, floor-to-ceiling doors make less financial sense to the owners and the government, therefore the gaps.

Why do Public Toilets in the U.S. have Side Gaps in the doors?

Although we have already discussed multiple reasons above why public toilets in the U.S. have both side and bottom gaps, let us now talk precisely about the side gaps that are about one inch on either side of the door, between the door hinge and the walls.

For starters, these side gaps are a part of the universal design of the commercial half-doors that are mainly used by public toilets. Since half-doors are not custom made and only installed, the gaps on the side make it easier to install these doors with ease of adjustment.

The side gap in the door is also important for clearance of the door swing and hinge components which allows cleaners to scour the edges and clean them. Side gaps are a result of fewer grooves and edges, which eases the cleaning process.

The side gaps also increase the durability of the doors since no water accumulates in them; therefore, rusting and other issues are kept at bay.

Why do public Toilets have U-shaped Seats?

The U-shaped toilet seats, also known as an open-front toilet seat, were basically designed with women in mind. You can find these toilet seats in most of the public washrooms and restrooms, as they are required by the plumbing codes of the American Standard National Plumbing Code.

This code was introduced in the year 1955 and was later reinforced by the 1973 Uniform Plumbing Code, which was put in place by the International Association of Plumbing and Mechanical Officials (IAPMO).

What the code basically stated is that all seats of the water closets for public places should be made of smooth and non-absorbent material and shall have an open front type.

In general, the U-shaped toilet seats are largely a matter of hygiene, and they also give more breathing room which helps to avoid touching your genitals with the seat, and it provides one with less place for urine to splash.

The open-front design of the toilet seats provides enough space and allows the women to wipe the perineal area after they have used the toilet without coming in contact with the toilet seat.

It can also be said that the open-front type is designed for front-wipers. It is opted by most business owners because of the requirement of less material to produce than the round-shaped toilets.

This open-front toilet design is arranged in such a way that it provides space that an individual can do work and other activities efficiently and comfortably. They have great flexibility and can support different body types and weights.