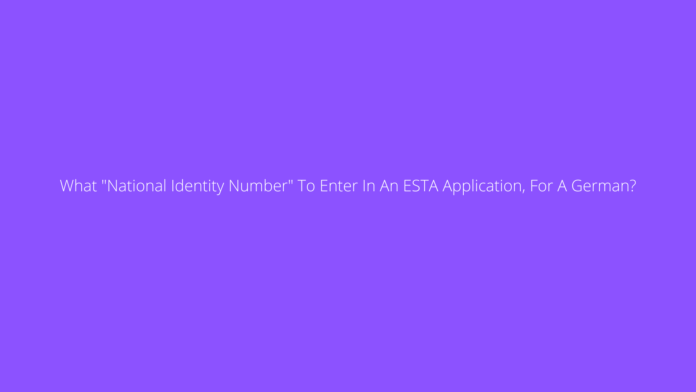 What Is An ESTA?

The Electronic System for Travel Authorization (ESTA) is a web-based system operated by the US Customs and Border Protection (CBP) to determine eligibility to travel to the United States for tourism or business under the VWP. The purpose of ESTA is to assess whether such travel poses any law enforcement or security risk.

VWP or the Visa Waiver Program enables most citizens of participating countries to travel to the United States for tourism or business for stays of 90 days or less without obtaining a visa. To enter the US as part of the VWP, you must apply for an ESTA.

What Is The National Identification Number (NIN) In ESTA?

The National ID Number refers to the identity card number, equal to the number mentioned in the identity document issued by the country. The NIN appears in your national identity card only and is not a part of any of your travel documents, such as the passport.

Your ESTA application is based on the information in your passport and not on your national ID card. But you have to mention the NIN in your ESTA form as part of your authorization.

What Is The National Identity Number (NIN) For a German Citizen?

While filling an ESTA, the NIN field appears after selecting the country of citizenship (Germany in this case). While this field appears for countries like Germany, Netherlands, and South Korea, there are several countries for which it does not appear, e.g., Austria, Switzerland, Sweden, UK, and others.

In Germany, there is no national identification number per se since Germany does not have a centralized system of numbers for all individuals, unlike the Netherlands or Norway.

For a German national, the National Identity Number would be the number given on the top right corner of the Personalausweis, usually considered as the German national ID card. Thereby, your NIN corresponds with the serial number of your identity card. If you do not have a valid Personalausweis, you should fill “UNKNOWN” or “DOES NOT APPLY” in the NIN field.

Even if you do not fill the NIN field, “UNKNOWN” would automatically apply it because the US Immigration service has not designated any national ID number to several countries, one of which is Germany.

Can I Apply For An ESTA If I Do Not Have A National Identity Card or NIN As A German National?

Yes, you can. It is noteworthy that even travelers (German) without a national ID card can just as easily apply for an ESTA. The inevitable requirement for an ESTA is a valid passport.

Ans. No. An ESTA is not a visa. It does not meet the regulatory requirements to qualify as an American visa and hence cannot be used in place of a valid visa.

Q2. What are the passport requirements to travel to the US under the Visa Waiver Program (VWP)?

Ans. To travel to the US under the VWP, you must possess an e-passport with a digital chip containing your biometric information. Additionally, the passport must have a machine-readable zone on the biographic page.

Q3. When should I apply for an ESTA?

Ans. The US CBP recommends that you apply for an ESTA at least 72 hours before travel. But you may apply for it anytime before boarding as the turnaround time is usually less than a minute.

Q4. What Should I Fill In The NIN If I Have Dual Citizenship?

I hope this article made the ESTA, VWP, and NIN more comprehensible, especially if you had doubts regarding the same as a German national.