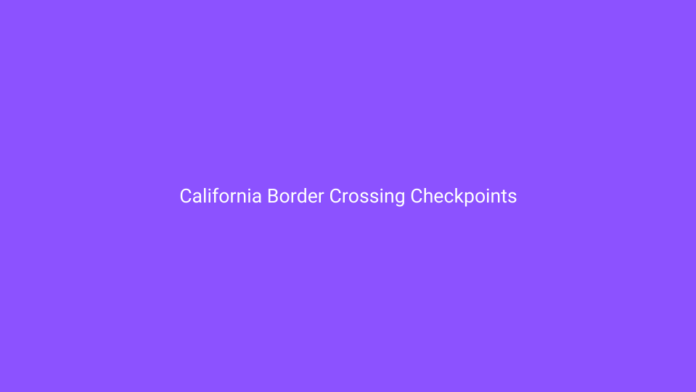 Your vehicle was stopped while entering California at one of the border crossing checkpoints, and when you were expecting an interrogation, the officer just waived and let you go. Confused about why the officers checked the other vehicles thoroughly and interrogated the owners for minutes while they let you pass within seconds and that too without taking much note?

While this might come across as an absurd complexity to you, it is for a reason. Are you still wondering what this is all about? Then this article will ease all your troubles as it covers all such questions and relevant information about the crossing checkpoints at the borders of California.

California Border Protection Checkpoints or California Border Protection Stations (CBPS) are checkpoints along California’s land borders with Arizona, Nevada, and Oregon. At these stations, vehicles are inspected for commodities, essentially fruits, vegetables, and plants, that could be infested with exotic invasive species or violate the state or federal plant-quarantine laws.

California established its first agri-inspection center in 1920. Today there are 16 BPS located on major highways entering the state and are managed by the California Department of Food and Agriculture (CDFA).

Why Does California Ban Some Foods From Entering Its Borders?

California’s Border Protection Stations (BPS) are the first line of defense in the state’s pest exclusion efforts. The CDFA is protecting against the introduction of environmental and agricultural threats in the state, which could be in the form of plants and plant products like fruits, vegetables, hay, firewood, animals- wild livestock and domesticated pets, insects, organisms, and microorganisms (ex- a harmful virus).

Owing to being surrounded by natural barriers, California is naturally free from several invasive weeds, insects, and disease-causing species that can wreak havoc on agriculture and the environment. But this does not reduce the threats of human-introduced pests, which usually travel with produce, plants, or animals, sometimes brought by unsuspecting vehicles.

They thrive, cause infestations, decimate the local crops, and sometimes permanently damage the local ecosystem rendering it uninhabitable for native species and making it ineffable for grazing, recreation, and other uses. It happens because the new environment is free from the natural predators that keep them in check in their home environment.

So to reduce the number of pest introductions and ensuing infestations, California maintains a pest prevention system, a part of which is pest exclusion—inspecting commodities as they enter as a preventive measure.

Why Are These Restrictions Important?

Economy! California has more than 77,000 farms and ranches, and its agricultural exports are worth more than $22 billion. It is a high priority process because such products need to be certified as free from diseases and pests to export globally.

Moreover, the industry generates over $100 billion of related economic activity apart from directly generating more than $50 billion. It very well explains the importance of the agriculture industry of California.

Why Do The Officers At Border Checkpoints Do Not Seem To Do Anything?

So if the Border Checkpoints work so diligently, why did the officers not give you the chance to project how harmless you were? Because most likely, they knew it! There could as well be other reasons, and I will be explaining all of this in detail here-:

Why Was My Vehicle Waived Off Without Any Inspection?

Where are you coming from? Do you have any produce? Where did you purchase it? Can we inspect your recreational vehicle?-

and when your turn came, you were not even stopped and were waived off without any interrogation. Before diving into that, let us first understand which vehicles are subject to interrogation.

So if your vehicle had a Californian or a neighboring state’s license plate, it is ordinary for the officer at the CBPS to waive you off without interrogation as your vehicle lies in the low-risk category. The officials also usually do not inspect private vehicles and cars unless they are apparently hauling something. It is also because it is busy all year round as more than 25 million vehicles are inspected every year at the Californian BPS.

But if you drove into California a commercial vehicle without any inspection (not even visual screening), this might have something to do with the low alertness of the officials. On this note, let me tell you that it is seldom the case.

What Happens To A Vehicle Carrying Illegal Material At The Californian BPS?

Vehicles discovered to be carrying infested cargo are denied entry into the state. In case they are allowed to enter, the officers confiscate their materials before letting them in. Also, the possibility of facing fines is never ruled out.

If the CDFA inspectors stumble into illegal non-agricultural material such as cocaine or illegal immigrants, they have no authority to make arrests. They hold back the vehicle until the California Highway Patrol officers arrive.

Q1. Can I bring fruits to California?

Q2. Are firewood and hay allowed entry into California?

Ans. Firewood is not banned from entering California, but it is subject to inspection for insects and disease symptoms at the CBPS. The wood is rejected if the inspectors find insects or disease symptoms.

If the CDFA officials find pests in the hay upon inspection, they reject the shipment. Otherwise, there are no specific restrictions on bringing hay into California.

Q3. Can I bring pets and livestock into California?

Ans. While the CDFA allows adequately vaccinated dogs and cats into the state, some exotic animals species like ferrets, gerbils, hedgehogs, Quaker, and sugar gliders are restricted.

Inspectors at the CBPS record the movement of all livestock into California. When a person arrives at the station with livestock, he will be asked to provide information about the owner, origin, destination, species, and number of animals. If the inspectors are satisfied after the requisite procedure, livestock may be allowed to enter California. For more information on livestock entry requirements, you can visit the CDFA Animal Health Division Website.

Q4. Are there any inspections upon leaving California?

Ans. No, there are no inspections when you exit the state. But almost all states have some plant quarantine regulations that must be complied with. Therefore, it is necessary to inquire about such restrictions in the state you are traveling if you plan to move any plant material out of California.